Pegasus is a family-owned used and new bookstore in West Seattle, under its current ownership since 1983. We have large selections of mystery, science fiction/fantasy/horror, literature/classics, romance, graphic novels, children's, young adult, art, poetry, history, gardening, crafts, religion, spirituality, psychology, philosophy, cookbooks, health, travel and tons of other things!
Follow us on Instagram or Facebook to see what we're getting up to! 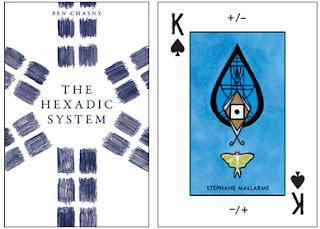 We're very pleased to announce that Ben Chasny, renowned psychedelic folk and rock guitarist, will be speaking at Pegasus about his new book and "Hexadic" card deck.

Ben is best known for his psych folk project Six Organs Of Admittance, whose early albums were formative of the so-called New Weird America movement of the late 2000's, but his noise rock project Comets On Fire is superb in very different ways.

The Hexadic system is an imaginative compositional strategy or game based on the philosophical concepts of Gaston Bachelard, the organizational schemes of medieval logician Raymond Llul, and the occultist Cornelius Agrippa.

Ben's well-reviewed album Hexadic under the Six Organs moniker was composed using the system and is available at Easy Street, and a limited number of copies of the book and card deck will be available at Pegasus during his visit. More info about his Hexadic project can be found here:

This will be a rare chance to meet and learn from one of our great modern musical thinkers, so be there or be square!
Posted by Pegasus Book Exchange at 6:47 PM

Trade In A Nutshell

View all the details about trading with us here.

Check out our fabulous reviews on Yelp!